In July 2021, the news of Mr. Rafiqul Amin attending a meeting on Zoom from the prison cell went viral. It almost seemed like the phrase Destiny-2000 came to life, though some people started to bring the name while discussing the recent criticism and scrutinization of some eCommerce sites. But for me, that viral news brought back some memories.
It was about eight years ago. My friend from my hometown come up with a new business proposal for me. It wasn’t exactly a business proposal other than a mere sell. However, the idea was to invest in a business that would yield profits from a tree plantation project. Luckily, I did not invest. I wonder what the reason could be! Maybe I didn’t have enough money back then. Oh, I forgot to mention the name of the business. Let’s announce the name “Destiny-2000” without a grand opening. No grand opening? Let’s see why.

The trending topic of the decade

Destiny Embezzlement is considerably one of the biggest embezzlement in the history of Bangladesh as many reports suggest. I can not make an absolute opinion on the issue. But my tone in writing is based on the present outcome of the case.

According to the investigation made by the regulatory bodies, it was found that many people were in a destitute situation financially because of the embezzlement.
Destiny Group was charged with the allegation of embezzling approx. forty billion crore taka that was collected over a decade. That is indeed a lot of money. But how did they outsource these kinds of money? Let’s rewind back from the beginning.

Destiny Group at a glance 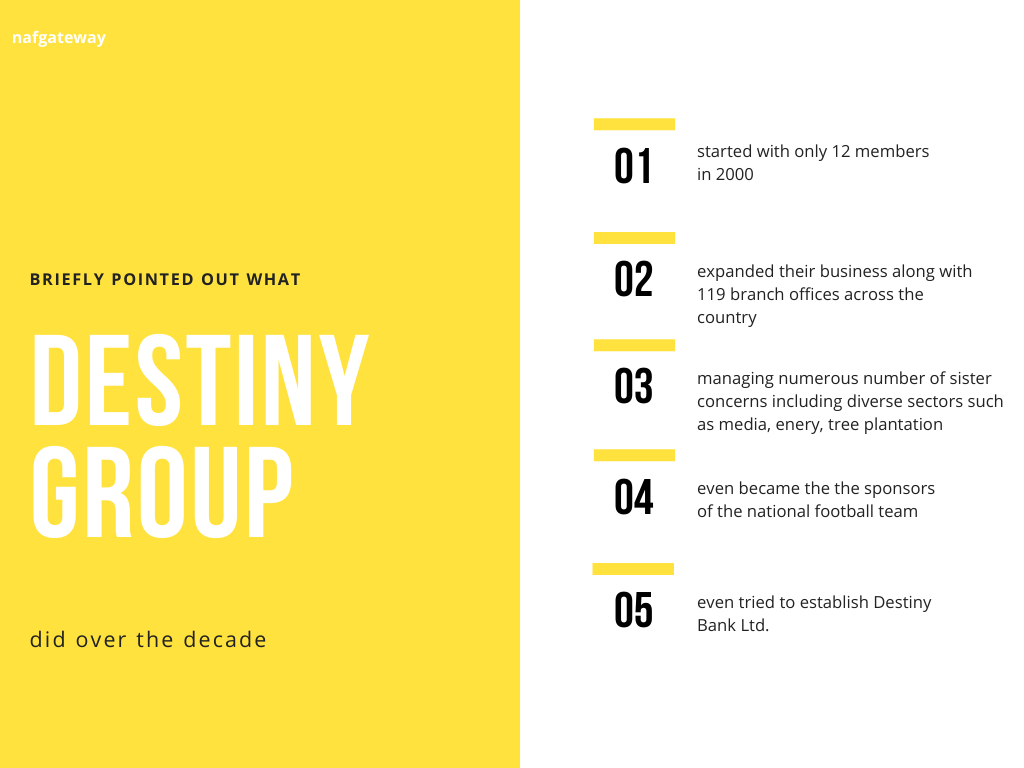 Through these numerous sister concerns, Destiny Group gained a massive amount of wealth. But in 2014, the Anti-Corruption Commission pressed charges on Destiny Tree Plantation (DTPL), and Destiny Multipurpose Cooperative Society Ltd where the top executives of  Destiny Group misappropriated the funds.
The concerning issue here isn’t the wealth. The decisive matter that should be discussed here is how the business existed for more than a decade.

The business model of Destiny Group was multi-level marketing also known as MLM business. Even though the multilevel business model is a legitimate business method, it is controversial due to the prone to become a Pyramid Scheme or Ponzi Scheme. 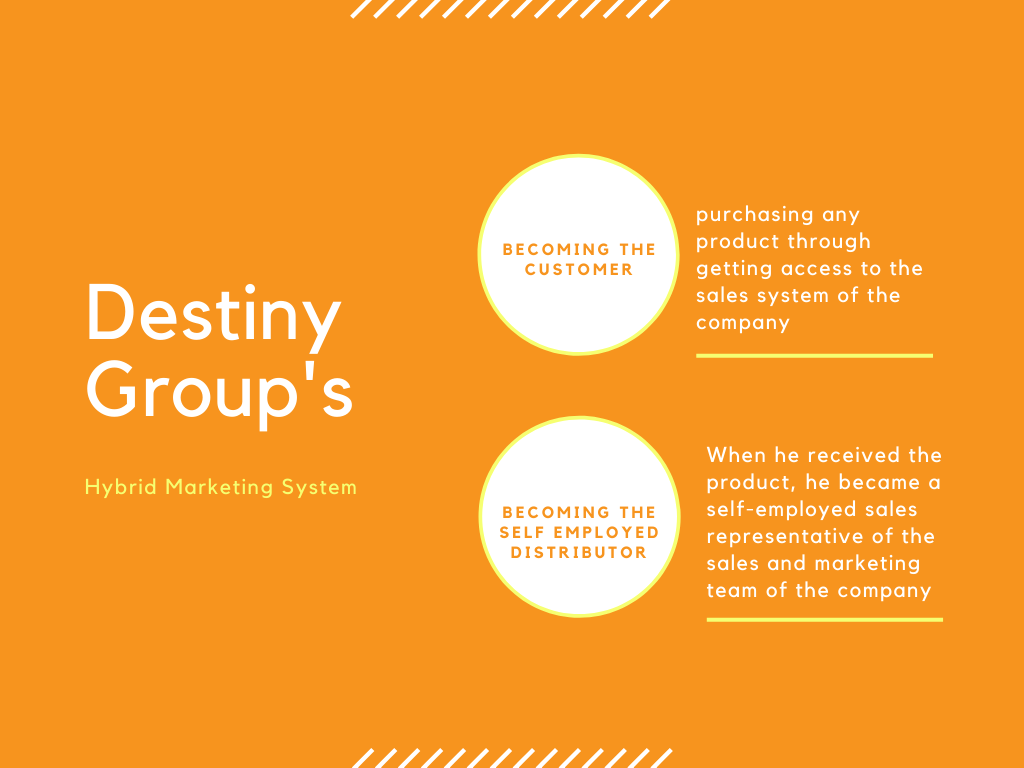 The system looks pretty simple, right? But there is another issue which is recruiting new members. Destiny Group offered a commission to the ones who could bring new people into the company. It is also reported that the top layers of the business received and embezzled the money while the self-employed distributors were putting their effort into recruiting new ones with the hope to gain additional commission. So the process went on and on like for a decade until the Anti-Corruption Commission (ACC) filed cases against them.

Obviously, the lucrative commission rate on investments lured a huge number of people. But it wasn’t entirely about the profitability rate or commission rate. I think there were some other catalysts. For instance, the confidence the owners showed about their business was really something to see.

In a seminar, Mohammad Ashraful Amin, former Chief Co-Ordinator stated, ” Destiny-2000 gives us all a throne”. This was the typical way, many self-employed sales representatives presented sales speeches to customers while they themselves were customers. Sometimes some of these sales representatives provided exaggerate information to recruit others. Their usual targets were housewives, students, unemployed people. Most of them lacked investment literacy.

You cannot deny the leadership skills of the executives of Destiny Group. They trained their employees in a way so that they could make good sales speeches. They had their media platform. They brought some people to whom people put trust.

When rumors started to grow rapidly, Mr. Rafiqul Amin was invited to the Tritio Matra (one of the most popular talk shows) to explain those rumors circulating through the media. The talk show host Mr. Zillur Rahman’s first question was whether there was any risk involving Destiny Group. Mr. Amin’s answer was astonishing for a guy who is living in the year 2021.

Then he thanked the host for the question. Most interestingly, he categorized his recruits. He said that those who invested efforts did not complain about the company. He mentioned that a group that made noise wasn’t finding success in his company. He even blamed the media slightly for mispresenting the facts. Later, he started to explain how effectively his company was performed and so on.

The managing director and other top officials are in jail. Now you may ask a question. Who is in charge of the assets that were amassed by the top officials?
Large amounts of assets of Destiny including a jute mill, a TV channel, cars, cold storage, houses, cinema halls, and cropland, etc. from twenty-two districts of the country have been in charge of Bangladesh Police. 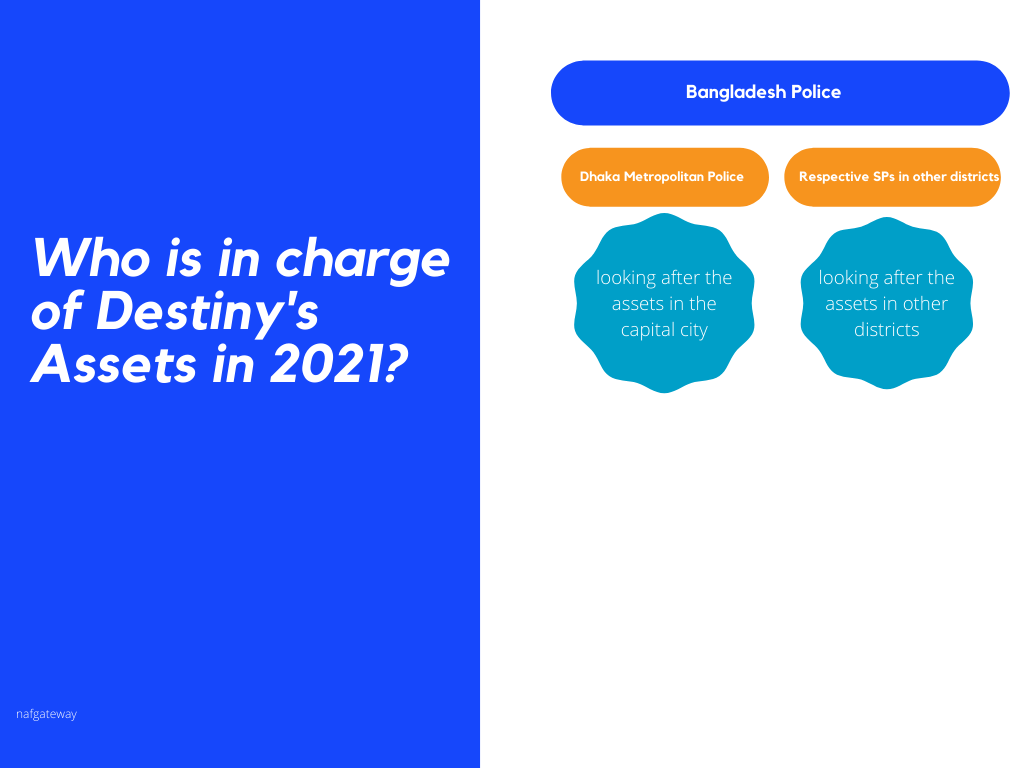 Scams, embezzlement, fraud schemes, offshoring are nothing new. They are real and common in our society. Many people lost their belongings by investing in the wrong place.  Frauds are always searching for a space to take advantage of people’s trust.
It is much needed to have strong regularity bodies so that these frauds can not find a chance to sustain. However, I think we need more awakening people who are financially literate who wouldn’t fall for the trap. If we raise awareness, fraudulent activities can be reduced.
If we find any unusual investment opportunity that offers way more profits, we should have to rationalize and rethink whether the investment is really a sustainable thing to invest in.