An Introduction to Capital Budgeting : Brief Discussion on Payback Period, NPV and IRR with Examples

Mr. Issac, an owner of a small firm wanted to buy a machine that would improve the productivity of his firm. The machine would be operated for the long term. As it was a kind of investment for the long term, Mr. Issac was worried whether the decision of investment would end up being successful. So, he went to his friend who knew a bit about finance. After discussing with his friend, Mr. Issac learned a new term called Capital Budgeting. It was a new idea for him. He googled capital budgeting. So let’s check what he found!

As you guessed, capital budgeting aka investment appraisal is a process of plan and assessment whether the long-term investment proposals are worthy enough to be selected.

As large amounts of capital are tied up for the long term, any error certainly has greater consequences. So forecast must be accurate.

There are a couple of techniques in capital budgeting. Some are time-consuming, some are complicated and effective. The payback period, NPV, IRR are notable ones.

Oh, we forgot about Mr. Issac who wanted to invest CU (cost Unit) 46,000 in equipment. He was informed that the machine would last for 4 years. He estimated he could sell it for CU 4,000 four years later. Mr. Issac is now ready to apply payback period as he finds out that this is the easiest method by which he can know the length of time it takes to retrieve the cost of the initial investment which was CU 46,000.

The payback period will tell you when you will recover the initial investment cost.

Mr. Issac chose the payback period out of other capital budgeting techniques because it is pretty simple and quick to calculate. Mr. Issac easily understood the concept. He now knows that if his payback is for long period, the investment will be riskier.

So let’s see how he calculated payback. As he knows exactly how much money he will be benefited each year from buying the machine, he arranged forecasted operating profit yearly. Operating Profits as follow:-

How he calculated depreciation:

Now Mr. Issac wants to evaluate his investment proposal using NPV. He decided that his required rate of return (minimum amount of profit) would be 10%. 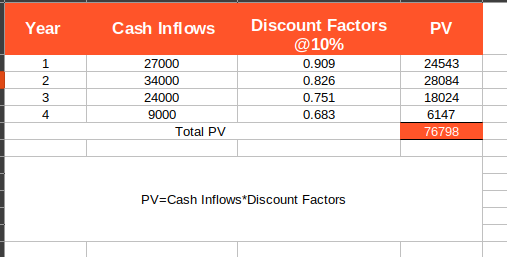 Does, Mr. Issac choose his investment? Let’s see the criteria.

Mr. Issac can accept the project as its NPV is positive.

Let’s talk about another important capital budgeting technique called IRR.
The internal rate of return is considered as the discount rate at which, the Net Present Value is equal to zero.
IRR method is a discounted cash flow technique but it is a relative appraisal technique where NPV is an absolute measure.
Because of being a relative appraisal technique, it is more understandable than NPV.
Managers or users who belong to the non-finance background can understand IRR more easily.

Let’s get back to Mr. Issac. He has a new project where he wants to know the IRR. Cash flows of the project as follows:

To find IRR, we need to calculate two NPV. Creating one NPV negative and the other positive is the first task to be exercised to calculate IRR.
Calculation of IRR has been done with trial and error exercise as satisfactory findings can not easily be obtained. We have to make several attempts to get the rate we want.

These three appraisal techniques help investors to make better decisions. As the capital has been tied for a long period of time, sophisticated evaluation is much needed.

Here, a very basic idea of capital budgeting techniques is given. Hopefully, it may help the beginners.